All this began when I saw a FB post quoting Jane Goodall:

“How is it possible that the most intellectual creature to ever walk the planet Earth is destroying its only home?”

When we learn that Greenhouse Gasses get trapped in our atmosphere, the implications aren’t immediately apparent … but some time later, when the reality sinks in, it quickly becomes apparent that ‘We’re seriously screwed!’

Our Climate Crisis is a ticking time bomb, and unless we do something, we’re doomed.

During the nineties I was designing concentrating solar collectors that follow the sun. I was experimenting, at the same time, with Wind and Biogas energy generation, studying Permaculture, and exploring sustainable building techniques. Years later, while driving my daughter to elementary school in one of Vancouver’s first electric cars, I was still desperately seeking an answer the question that Jane asks.

Not just any answer, but THE answer — because that information could prolong my daughter’s life.

Knowing, definitively, “WHY we do what we’re doing”, creates a narrow window of opportunity for appropriate action.

My hard work finally bore fruits when Behavioural Loop Theory led me to discover the invisible behavioural DYNAMIC that I’d been searching for.

To understand this dynamic, one needs to feel comfortable with these three premises:

Inclusion/exclusion is an unspoken aspect of our everyday existence and many of the cultural battles that we’ve fought have been about INCLUSION, and about ending the pain resulting from EXCLUSION.

Here are some examples:

Over the course of an average day, most people are unconsciously responding to the same fundamental question framed in a variety of ways: “Are you with us or against us?”

Here’s what I mean:

Fear of exclusion OVERRIDES our, often sincere, desire to change.

An individual’s relationship with EXCLUSION has its genesis in the terror that the individual experiences at one-week old when their cries for help from a parent went unanswered for longer than their nervous system was able to tolerate, before escalating into a state of alarm. This traumatic experience repeated itself every time a caregiver was preoccupied, taking care of someone else’s competing needs.

Infants lack an adult’s ability to visualise the future. Their immature brains are not developed enough to imagine scenarios in which their caregivers return. When a parent is unavailable, from the perspective of a one-week old, their caregiver may never return, and there’s nothing that the can do about it. From an infant’s perspective: Loss of connection is a full-blown life-or-death crisis.

As adults we carry this PREVERBAL trauma in our cells (rather than in our brains like other memories) and whenever a person finds himself/herself in a situation where the threat of prolonged, involuntary isolation or EXCLUSION becomes imminent, the awful emotions associated with this trauma return.

Given what happens to us when we’re presented with situations that could lead to EXCLUSION, it’s no wonder that we avoid situations like these, like a plague. We prefer to lose our lives to the forest fires, famines, floods, and climate-related nuclear meltdowns that are coming down the pipeline, than that feel as terrified and as powerless as we did as unattended infants.

Take a look at how this plays out in our daily lives (It’s best to do this without projecting any judgement if you’re able to):

For voluntary change to occur, it needs to happen collectively:

* This number reflects a reality in the USA

EXCLUSION is not the enemy

This graphic shows us that eating and drinking are possible responses to hunger and thirst.

Unless the person is suffering from a psychological condition like Obsessive Compulsive Behaviour, they stop eating, drinking or washing once the desired emotional or sensory outcome has been achieved.

Among its list of actions, the graphic includes “Build a coal mine”.
This begs the following questions:

Most large scale projects like coal mines are initiated and driven by individuals seeking wealth, power and respect. (Still not judging.)

When an emotionally-healthy person feels sufficiently worthy, like the person who stopped washing their hands once they were clean, they STOP acquiring additional wealth, power and respect. They’ve no use for more than what they have.

Individuals who never receive that signal from their nervous systems to STOP acquiring wealth, power and respect, and those who receive the signal but nevertheless CONTINUE destroying forests, polluting rivers, selling non-defensive weapons and concentrating wealth are sick.

Like crack addicts, they’re UNABLE to stop what they’re doing, even if they destroy themselves, and every other living being. No matter what they do, they’ll never feel worthy.

If we want to survive, then these sick individuals and families need SOMEONE ELSE TO INTERVENE.
Sick individuals who can’t stop themselves need others to stop them and to isolate them from society so that they can’t cause further damage.
Once they’ve healed and their dysfunction no longer poses a dire threat to our collective wellbeing there’s nothing to prevent them from being reintegrated in society without any prejudice.

Utah Phillips used to say: “The Earth is not dying, it is being killed, and those who are killing it have names and addresses.”

When millions of people, like us, neutralise and shun those individuals, and families, who:

… by ensuring that they are unwelcome in our homes, our businesses, our governance, our institutions and our social gatherings, then our use of EXCLUSION will be improving collective chances of survival.

The time has come for us to turn the tables and to defend ourselves.

Share on Facebook
« Previous Post Copy of an open letter to Eve Ensler following the Democracy Now interview about her new book, “The Apology”. Next Post » Time to Turn the Tables and to Defend Ourselves – Philip Be’er 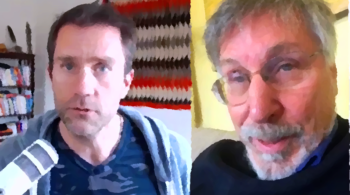 Fix It With Love

To join the group of fewer than 1000 people: